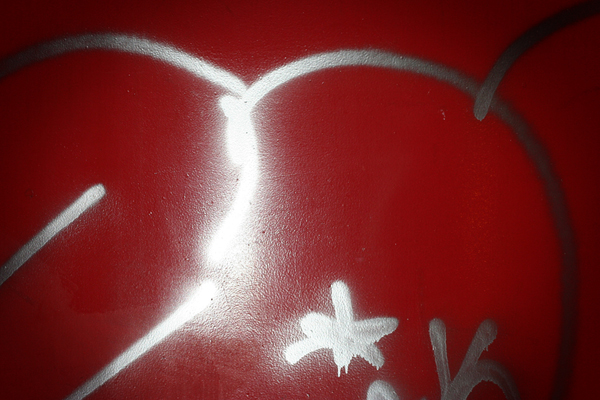 Last September we went up to Seattle for the Bumbershoot festival. I posted a bunch of blurry photos from the fest a while back. Here’s the last of the series: click. (The blurriness is a thinly veiled attempt to mask my shitty equipment with pretensions of fartsiness.)

The festival was pretty good! (Our housing arrangements were a fiasco, but that’s another story…) And they let you bring in cameras to most of the events as well.

Midway through the Matt & Kim set, we thought it might be prudent to re-invigorate our spirits with a trip to the beer garden. This particular beer garden was centered around a large, orange, abstract sculpture (Alexander Liberman’s Olympic Iliad, visible here). Sarah spotted some aesthetically pleasing silver graffiti, and I took a picture.

(I wonder if having a LARGE, ORANGE sculpture in a place where you drink was an intended reference to Ron Stevens & Joy Grdnic’s “Fast Food.”)