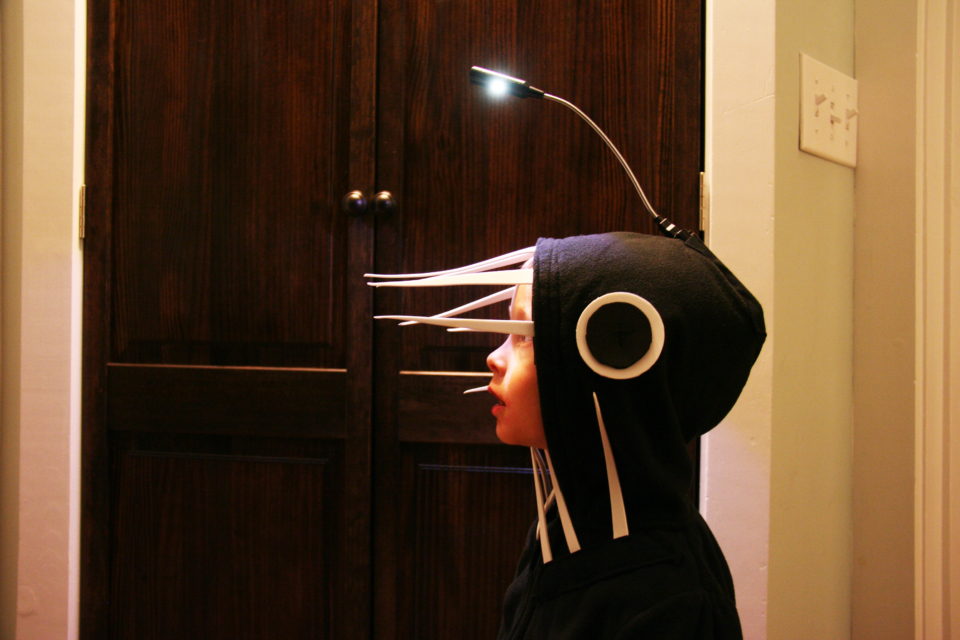 We were walking back from dinner the other day and Otis pointed out some “scary lights” in a parking lot behind the local burger joint. We asked him why the lights (they were just normal streetlights) were scary and he said “I don’t know…”

“Speaking of scary,” I said, remembering an ongoing discussion about his trick-or-treating attire, “have you figured out what you want to be for Halloween yet?” (Ghost, clown, and goose had come up, but none of them seemed to have stuck.)

“A scary light,” Otis replied after thinking it over for a minute.

Taken aback, I asked “how are we going to do that?”

Otis thought about this for a few moments and then simply said, “a scary light fish.”

He’d called the streetlights scary before, but it wasn’t until right then that I realized he thought they looked like anglerfish (which he’d seen, I think, on Finding Nemo) with the light out on the end of a curved arm. Holy moly. The perfect costume followup to last year’s spider web.

It was getting down to the wire since “fright night” in town was coming up. We gathered materials the next day: a black hoodie, some black fleece pants, some arts-and-crafts foam from Walmart, and a flexible booklight. The light was the hardest thing to find. We found one with a retractable grabber at Lowe’s, but it wasn’t very bright. We found a small one at the bookstore, but it wouldn’t have reached out past his forehead. Finally, after wandering around Walmart for over an hour (while talking fruitlessly to customer service on the phone for walking directions) we found exactly what we were looking for.

Back at home, I cut long teeth out of foam and sewed them to a black strip of fabric I cut out of a black thrift-store jacket. Then I sewed the strips of teeth onto the hoodie along with a couple of large foam eyes. I sewed a little black pocket on top of the hood, popped some batteries into the light, and stuck it in.

We were all surprised by the number of people that actually figured out what the costume was! (Also, mental note for next year: putting lights on costumes for little kids is a great idea since we’re not the kind of sissies that go trick-or-treating in the daytime!)

Here’s another shot with AnglerOtis making a scary face: